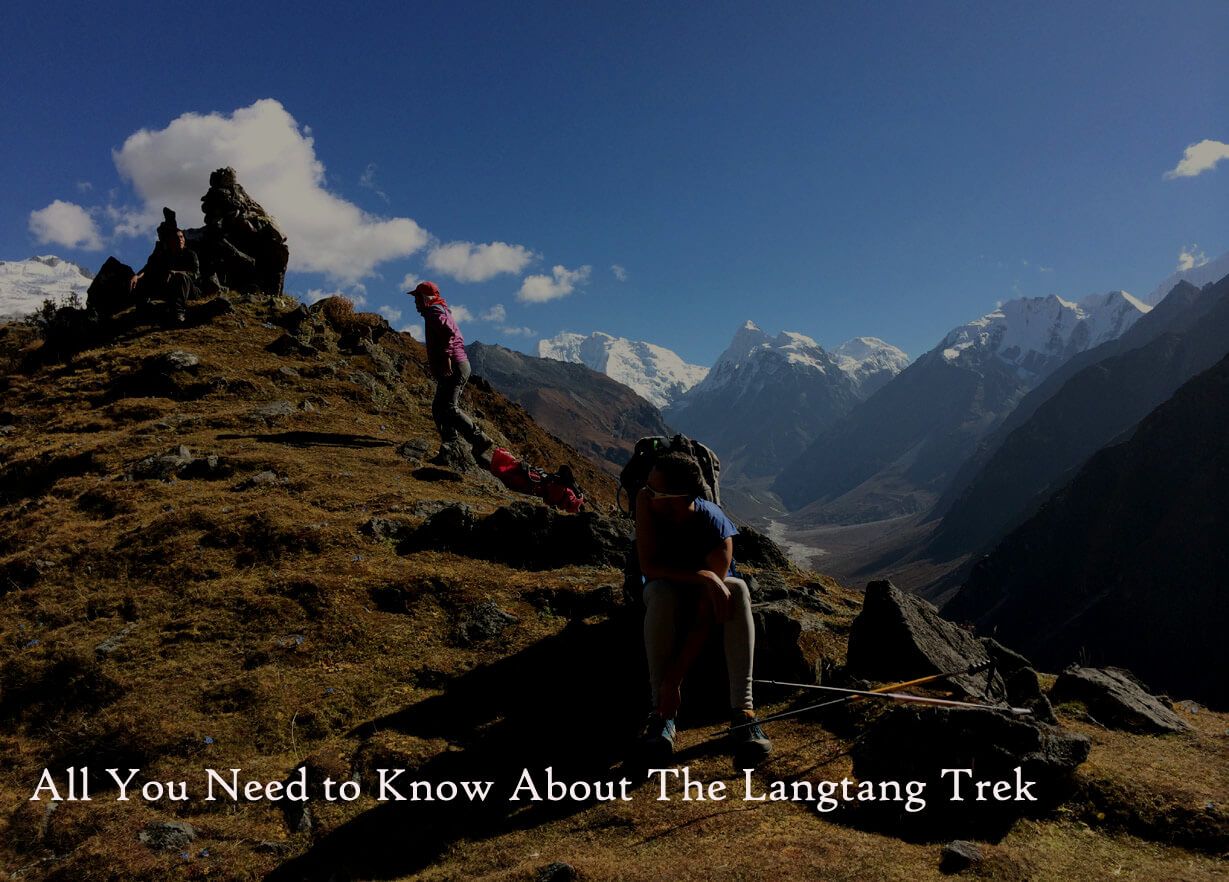 Located just in Kathmandu and just on the edge of the Tibetan border, the Langtang valley trek explores the extravagant Langtang valley, situated in the mid-western region of the Himalayas. Once described as “One of the world’s most beautiful valleys” by the famed British mountaineer, Bill Tillman (1898-1977), the region rightfully earns this title due to its extravagant natural beauty.

Basked in the breathtaking scenery of green hills, forests, plain villages, magnificent waterfalls, and colorful rhododendron forests, the region allows us to explore many more natural attractions as we travel the path toward Langtang valley. The Langtang valley is situated within the Langtang National Park, home to a vast variety of exotic wildlife, including the Red Panda and the Himalayan Thar.

However, the chief highlight of this region is Langtang Himal range, and its highest peak, Langtang Lirung (7227M), which dominates the valley. It is truly a sight to behold. The region mainly consists of the Tibetan population, and it is rich in Buddhist culture and history.

The Langtang valley trek is a relatively short and easy one lasting only about 11 days but is nonetheless well suited to fulfill your thirst for adventure. The trek starts from Kathmandu, the capital of Nepal with a journey to Syabrubesi, and goes through Lama Hotel before reaching Langtang valley and back. The overall Langtang valley trek distance is around 19 miles or 30 km. During your trek, you will get to cover so many interesting places. A few of these include Syabrubesi, Dhunche, Lama Hotel, Langtang Village, and so on.

One of the major attractions of the trek is Kyanjin Gompa. It is a significant Buddhist heritage site for the people living in the region. If you’re looking to make your Langtang Valley trek a bit more adventurous, you can go ahead and cover Tserko Ri. It is a mini peak with a height of 5033 M. It takes a couple of hours to reach the peak, and the trekkers generally do that with great amounts of excitement. Reaching the top will offer you exciting views of peaks in the region, and of the entire About Langtang Valley Trek.

The best thing about trekking in the Langtang region is that you have the freedom to explore other treks and attractions. So, by extending your Langtang Valley trek by only a couple of days, you get to explore other major attractions and trekking routes of Langtang. The attractions include numerous natural spectacles, villages, and even religious sites.

Ganja La Pass is a popular attraction in the region. It is a high altitude mountain pass situated at an elevation of 5122 M. It is one of the toughest passes to cross among all the passes in the country. Attractions as these contribute to making your journey further exciting. In the same way, another major attribute that you get to explore by extending your Langtang Valley trek by a couple of days is Gosaikunda.

Gosaikunda is actually a complex of high altitude mountain lakes situated at an elevation of 4380 m. To reach the complex, the trekkers need to cross Laurebina La, which is another high altitude mountain pass located at an elevation of 4610 M. The most unbelievable thing about the lake is that it remains frozen for a period of 6 months, and in its natural state for a duration of 6 months. It is also considered religiously significant by the followers of Hinduism.

Pilgrims, in large numbers, from across the country come to visit the lake premises in the month of August. There is a temple in the area that is dedicated to Lord Shiva. The complex is mythologically associated with the deity.

All these attractions that you will get to explore during the Langtang Valley trek is a part of Langtang National Park. It is one of the richest protected areas of Nepal when it comes to the large population of rare and endangered animals, plants, and other creatures that call the park home. During the journey, you’re bound to come across one or the other species of birds and animals, among the hundreds who live here. This feature makes the trek quite worthwhile. The national park is linked with Qomolangma National Nature Preserve towards the north. The nature preserve happens to be in Tibet.

Before embarking on any journey, gaining a basic understanding of the situation ahead is always important, and the Langtang valley trek is no exception to this rule. Food and accommodations are some of the more general concerns expressed by most who have embarked on this trek.

When it comes to food, a wide variety of cuisines are available at tea houses throughout the trek. These include Nepali, Tibetian, Indian, and Continental. Regarding your hotel stay at Kathmandu, breakfast is provided but lunch and dinner must be covered on your own. Arrangements for vegetarian, vegan, or lactose-free diets can be made if you inform us in advance.

Accommodations include a 2 or 3-star hotel during your stay in Kathmandu, and the best lodges picked by our guides while you’re on the route. All accommodations will be on a twin shared basis, and as you reach the mountains, even the showers and lavatories are on a shared basis.

As with most treks, About Langtang Valley trek involves walking in the high altitude. Thus, acclimatization days are included in the trip to prevent altitude sickness. A typical trek lasts from 5 to 6 hours per day. Although feasible for people with an average level of fitness, the trek is still quite strenuous and will require a bit of determination.

The trek itself can easily be simplified as a long hike in a high altitude, which requires little technical or mountaineering skills with days for acclimatization built in the itinerary. However, a moderate amount of fitness is still required particularly, stamina and leg strength. It is recommended that you start preparations 6 to 8 weeks in advance, with a focus on developing leg strength, and core stamina. Similarly having a high degree of determination is also important for completing the task.

Health concerns are important subjects for people who travel the Langtang valley solo. A higher level of physical fitness is required especially for them.

There is the various necessary equipment that is a must for your trip. These include an all-season sleeping bag and backpacking sleeping pad, a warm and waterproof jacket, mid to light trekking boots and trekking poles, a duffel and daypack, trekking trousers and shirts including a base layer and a second layer fleece, warm gloves including inner and outer and warm thermal socks. A total budget of $500 to $1000 is recommended for the equipment cost. But for trekking, we will provide you down jacket and sleeping bag and other things are not that much expensive.

It is also highly recommended that you carry travel insurance as trekking always comes with risks. The basic insurance needs to cover events such as flight cancellation, tour cancellation, and medical costs. Insurance policies may not cover trips that take you over 4000 m, so it is important for you to acquire details confirming that you are covered for both high altitude and medical air support. The insurance cost varies greatly but on average, it is around $150.

A licensed guide will be available throughout the trek and ready to address any concerns you may have. Our guides are well experienced when it comes to traveling the trails, and dedicated to making your journey a memorable one.

Safety is always the first and foremost priority. For a group exceeding six people, there will be two guides leading the journey. Porters are a must for carrying luggage. For teahouse treks, there will be a porter for every two trekkers. A camping trek will require more porters as food and necessities will need to be carried.

Similarly, visa, insurance, flight costs, and general costs of travel are also factors to be considered. The visa to Nepal costs $30 for 15 days, $50 for a 30-day stay, and $125 USD for 90 days. In conclusion, Nepal is in no way an expensive country, so you should find your Annapurna base camp trek budget to be quite reasonable.

When it comes to traveling or especially trekking through the wilderness is Nepal, you will have to take special travel permits. These permits are available in the city of Kathmandu, or at the gates of different protected areas that you will cover during the journey.

By granting these permits, the government seeks to not just earn money from the travelers, but also this is a way for them to keep track of the individuals who’ve entered these areas. The information comes in handy especially when the traveler or the trekker is in trouble and in need of some kind of support or rescue.

TIMS (Trekkers Information Management System) card is required which costs from $10 to $20 USD, depending on whether or not you are with a local trekking agency. However, the cost for Nepali nationals and SAARC nationals, in general, is only around $6.

For traveling in any trekking route in the Langtang region, a Langtang National Park Permit is required as all the major trekking trails fall under the Langtang National Park. The cost of the permit is $30 including a 13% VAT. However, the cost for a Nepali national as well as any SAARC national is around $15 including VAT. No charges imply for children under the age of 10. You can acquire permits from the Nepal Tourism Board.

If you choose to embark on the Helambu trail starting from Shivapuri out national Park, then you are required to pay an entrance fee of $10 including VAT.

About Langtang Valley Trek After The 2015 Earthquake

The 7.8 magnitude earthquake in 2015 was nothing short of devastating for the country as a whole with the Langtang region is no exception. Numerous settlements including shops and teahouses crucial to the trek were damaged. Just a few days after the quake, a subsequent landslide hit the damaged village.

Due to the devastating damage the region incurred (particularly because of Langtang Valley being ground zero for the earthquake), it was thought that the region would be permanently closed off with rumors questioning the safety of the tourists in the region floating around.

However, the reconstruction project began fairly quickly. The aftershocks stopped and the possibility of landslides/ avalanches increased, so the boulders blocking the trekking routes were removed. New trails and tea houses were built to replace the old ones.

Today the new Langtang valley lies 100 m above the ruins of the old one. The one house that managed to survive the earthquake has become a bit of a landmark. The route is now open with new trekkers visiting the region every year.

The optimum seasons for embarking on the Langtang valley trek are spring (March to May) and autumn (September to November) as the clear skies and vibrant scenery during this time make for a truly delightful experience. However, being high in demand means that there will be a bit of overcrowding compared to the off-seasons.

A winter trek (December- February) is also possible, but the cold at such high altitude will cause you so many inconveniences. It’s tough to walk in extreme cold. Also, you’re highly prone to sickness of all sorts. During a monsoon trek (June to August), chances are that the region will experience rainfall, increasing the chances for the mountains to be covered with clouds.

Himalaya Guide Nepal Pvt. Ltd. is a registered trekking company with professional guides and helpers. We have been working for 18 years in the tourism industry of Nepal, organizing trekking, peak climbing, expedition, hiking tours, air ticketing, hotel reservations, and adventure activities. We give you all a heartfelt welcome from Himalaya Guide Nepal for your secure and unforgettable holiday in Nepal.