The Ultimate Off The Beaten Path Manaslu Circuit Trek in Nepal 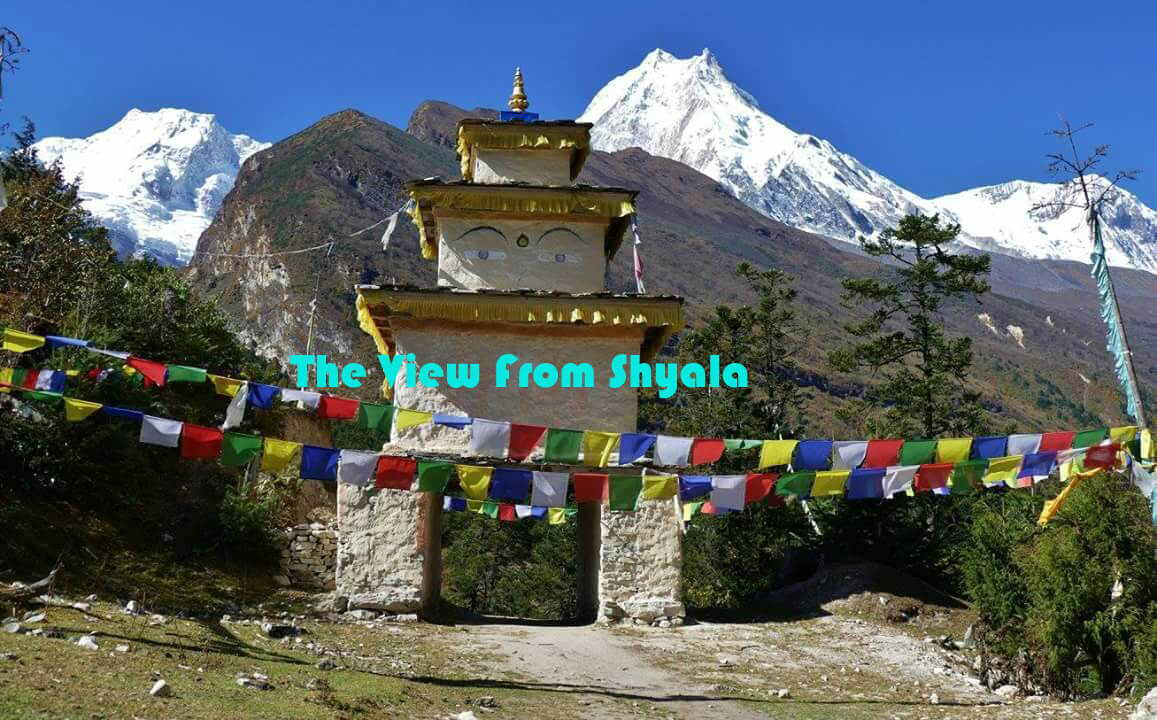 Located in the north-west region of Nepal, the Manaslu circuit trek or simply the Manaslu trek explores the jaw-dropping scenery of extravagant mountains, glacial terrains, gorgeous rhododendron forests. And a broad diversity of landscapes from subtropical jungles to the alpine, all of which are native to this region. The Manaslu trek also offers an insight into ancient Buddhist culture as we explore various historically significant elements in almost every settlement area that we come across.

The Manaslu trek offers a magnificent view of Mt.Manaslu 8156M, the eighth highest mountain in the World, as well as, the tenth highest mountain Mt.Annapurna I. Along with these, you also get to enjoy the Annapurna region views of Annapurna South, Annapurna III, Machapuchare, Gangapurna, and Mt.Ganesh. Larkya La Pass 516oM. Which is considered by many to be the most dramatic pass of the Himalaya region is also one of the main highlights of this trek. The journey is the epitome of adventure.

Manaslu trek is also considered as a great alternative to the Annapurna Circuit Trek. By those who wish to embark on a more off the beaten path adventure, mainly due to the fact that it doesn’t receive as many trekkers, with just over 2000 people visiting every year. The best thing about trekking on a route as such is that you get to be close to nature. And experience peace like you’ve never had before. Come to think of it, this is how trekking is supposed to happen for real.

The trek begins like any other regular trip to Nepal, with your arrival at the airport, and sightseeing around UNESCO World Heritage sites in Kathmandu valley. The following day, a half day-long drive from Kathmandu to Arughat, and subsequently, a couple of hours long drive will take you to Sotikhola, where the trek begins along the banks of the Budi Gandaki river. During the journey, you will cover places such as Machhakhola, Jagat, Deng, Namrung, SamaGaun, Samado, Dharamsala, Bimtang, Tilje, and Dharapani. On the trek, you will also get to cross Larkya La Pass 5160M. The journey ends as you take 4 to 5 hours long drive to Besisahar from Dharapani, and then back to Kathmandu.

In the beginning, you will go through various ethnic Gurung villages. But upon reaching a higher altitude, you will mainly come across the Tibetan population. The trek continues on a daily basis, however, at Samagaun, you will rest for one day for acclimatization. Altogether, the number of core trekking days in the Manaslu Circuit trek is 14 days. However, you can make variations to the itinerary, making your journey as long as 21 days. Needless to say, the period includes all the rest days and the ones assigned for side treks. The longest day is the one when you trek from Dharamsala to Bimtang. In the process, you also cross Larkya La. It is a high altitude mountain pass situated at an elevation of 5160 M.

The Manaslu circuit is a complex journey partly due to the variety of attractions found in the region. So, a general understanding of the area of the visit is important. Unfortunately, time is limited and not all parts can be explored. Thus selecting the most interesting sites to explore in such a vast area would require a Manaslu circuit trek map, with which you will have the freedom to select your sites of interest, the routes and side routes, and overall discretion regarding how you wish to conduct your journey.

Making plans, dictating your journey through the area, anticipating the challenges ahead, and deciding whether to face them or take a detour, becomes very convenient with the help of the Manaslu circuit trek map. A similar principle also holds for any of your general visits in Nepal.

Manaslu Circuit Trek After The 2015 Earthquake

The 7.8 magnitude earthquake in 2015 was nothing short of devastating for the country as a whole, with the Manaslu region being no exception. Numerous settlements including shops and teahouses crucial to the trek were damaged. The subsequent overflowing of rivers also washed away the trekking trail with the pathways at Yaru being an example. This, however, didn’t cause much damage to the trail at Uiya. Although the route was not dangerous, it was still quite difficult.

However, the task to restore the region was a priority among the populace, mainly as trekking was an important source of revenue for the region, and reconstruction projects began shortly. The parts of the trails damaged by the earthquake were rapidly restored, along with others, which couldn’t be supplemented via bridges and cross paths. The bridge near Budi Gandaki river near Jagat is one such bridge.

The Manaslu trail race, which involved around 25 trekkers and covered places such as Manaslu Base Camp, Pungen Gompa, and Hinang Gompa was conducted just a year after the earthquake and stands as a testament to the success of the reconstruction efforts. Today, the Manaslu Circuit trek has been restored perfectly safe and open for adventure.

Before embarking on any journey, gaining a basic understanding of the situation ahead is always important, with the Manaslu circuit trek being no exception to this rule. Food and accommodation are some of the more general concerns expressed by most who have embarked on this trek.

When it comes to food, a wide variety of cuisines are available at tea houses throughout the trek. These include Nepali, Tibetan, Indian, and Continental. During your hotel stay at Kathmandu, breakfast is provided but lunch and dinner must be covered on your own. Arrangements for vegetarian, vegan, or lactose-free diets can be made if informed in advance.

Accommodations include staying in a 2 or 3-star hotel in Kathmandu, and the best lodges picked by our guides on the trekking route. All accommodations will be on a twin shared basis, with the showers and lavatories being on a shared basis as you reach the mountains.

As with most treks, the Manaslu circuit trek involves high altitude climbing. Thus, acclimatization days are accounted for in the itinerary to prevent altitude sickness. A typical trek lasts 5 to 6 hours. Although feasible for people with an average level of fitness, the trek is still quite strenuous and will require a bit of determination.

There is the various necessary equipment that is a must for your trip. These include an all-season sleeping bag and a backpacking sleeping pad. And the warm and waterproof jacket, mid to light trekking boots and trekking poles, a duffel and daypack. Trekking trousers and shirts including a base layer and a second layer fleece, warm gloves including inner and outer and warm thermal socks. A total budget of US $500 to $1000 is recommended for the equipment cost.

Similarly, visa, insurance, flight costs, and general costs of travel are also factors to be considered. The visa to Nepal costs $30 for 15 days, $50 for a 30-day stay, and $125 for 90 days. In conclusion, Nepal is in no way an expensive country so you should find your Annapurna base camp trek budget should be quite reasonable.

It is also highly recommended that you carry travel insurance, as trekking always comes with risks. The basic insurance needs to cover events such as flight cancellation, tour cancellation, and medical costs. Insurance policies may not cover trips over 4000 meters, so, it is important that you acquire details confirming that you are covered for both high altitude traveling and medical air support. The insurance cost varies greatly but on average around $150.

The temperature starts getting colder from December, with January being the coldest one. Where minimum temperatures can drop as low as -16 degrees. However, for those brave and experienced enough, looking to go on an adventure, this may be an ideal time for travel. February is another ideal time for winter treks, as the climate starts to lean towards a warmer spring

Autumn treks are also a possibility. September is the time when the monsoon comes to an end and the days become brighter and clearer. Hence, it provides clear views of the varied landscapes. October is the best month for these treks, as the weather is stable and the temperature is perfect. It ranges between 12 and 18 degrees, which is neither too warm nor too cold. November is the time for the annual Manaslu trail race or marathon.

The Manaslu base camp trek explores the base of Mt. Manaslu in the Gorkha region, inside the Manaslu Conservation Project. The trek to the Manaslu base camp trek offers a breathtaking view of Mt Manaslu, Mt.Ganesh, Mt.Shringi (7161m), and Mt.Lamjung (6983m). The variation in altitude means this region is home to a vast diversity of flora and fauna including the endangered snow leopard, blue sheep, and many such creatures.

First opened to the public in 2008, the Tsum valley Trek is the ideal one for those who wish to experience Tibetan Buddhist culture in detail. This trek takes you to the northern side of the Manaslu region, near the Tibetan border, where you can explore antique monasteries, mani walls, chortens, and other intriguing and ancient Buddhist architecture. You can immerse yourself in the scenic natural beauty of the Himalayas, as the trek takes you through massive waterfalls and rivers and breathtaking cliffs. For those interested in the natural expedition, this region is also home to a vast diversity of rare wildlife. One of the birds that you get to spot is Lophophorus, the national bird of Nepal. You can go for either the pre-arranged housing or camping trek, or you can go for a tea house trek. The Tsum valley trek lasts for 22 days and explores the once restricted northern part of Manaslu.

Himalaya Guide Nepal Pvt. Ltd. is a registered trekking company with professional guides and strong porters from the mountain. We have been working for 18 years in the tourism industry of Nepal, organizing trekking, peak climbing, expedition, hiking, tours, air ticketing, hotel reservations, and adventure activities. We give you all a heartfelt welcome from Himalaya Guide Nepal for your secure and unforgettable holiday in Nepal.